Asset is accessed directly from the device (such as XBox, PS3) or through a UPnP Control Point running on a PC (such Asset Control, Kinsky Desktop) or hand-held controller (such as Kinksy, Lumin, or PlugPlayer on the iPad). Asset will appear on your UPnP control point as Asset UPnP: [Computer Name], select Asset to browse for audio tracks: 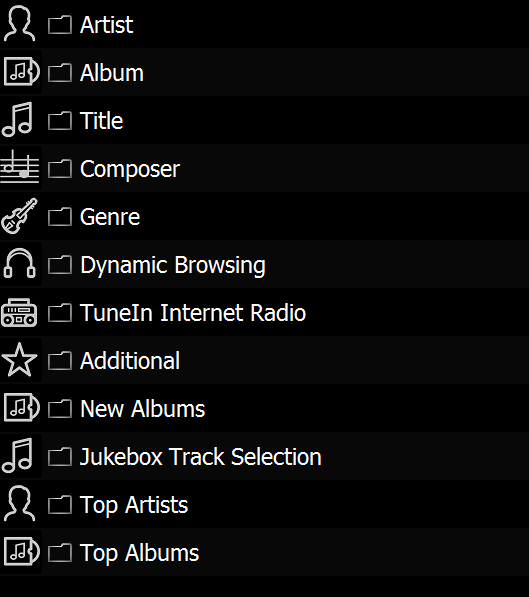 From here your audio collection can be browsed (by artist, album, etc).

Dynamic Browsing offers a way to customize the listing (Artist, Album, Tracks etc) results using inclusion or exclusion principles. The easiest way to describe is through example, for example you are having a party and you want Music from the 80's and 90's, but you want to exclude the Genre Classical and Genre Soundtrack, you would: Browse into Dynamic Browsing, do the included items first, so select Year >> 1980's, and Year again >> 1990's. Now the exclusions, select [Exclude] >> Genre >> Classical, and [Exclude] >> Genre >> Soundtrack, finally [List Albums] is selected (or [JukeBox Album Selection] for a random selection of albums).

It is that simple, you include and / or exclude items (when starting dynamic browsing every track is included, until an include is specified), once finished including & excluding a track listing, or album listing is requested with [List Tracks], [List Albums], [Jukebox Track Selection], or [Jukebox Album Selection]

Playlists item allows the selection of:

Internet Radio [TuneIn Radio] enables browsing of popular radio stations by Genre or location, a favorite list of stations can be created on the web site www.tunein.com and assigned to a user name which can be entered into Asset Configuration (see later) to allow access to these favorite stations.

Advanced Search lists many additional ways for browsing the library, as well as:

Asset is accessed from a configuration page, this page is reached on the QNAP by clicking 'Launch' on the Asset tile, in the App Center. On Linux, the configuration page is http://x.x.x.x:45537 where x.x.x.x is the IP address of the machine on which Asset runs.

The configuration page shows Asset version, its registration status and the library track / album count. The library can be rescanned, detecting changes is a fast rescan looking for changes, Rescan all re-reads each track ID tags. Clicking configure allows the Asset instances page to be accessed, by default one instance of Asset is defined, each defined Asset can be thought as a separate server, each with their own settings or music library. It is possible for example to have a Christmas Asset indexing just festive tracks, this instance of Asset can be disabled once Christmas has passed. 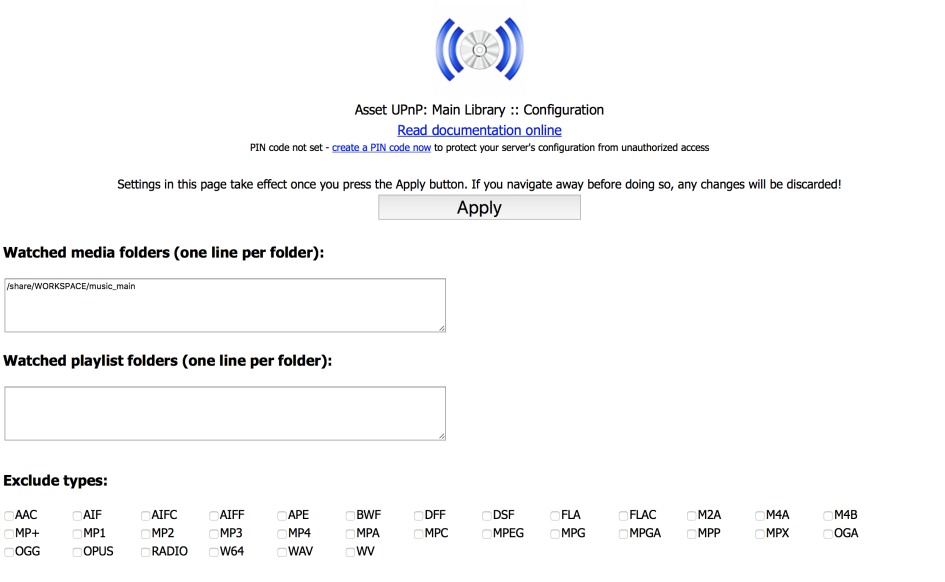 Watched Media Folders specifies which folder(s) Asset should scan for audio, on Linux it should start '/', the QNAP version of Asset should auto-detect the correct media folder. Watched Playlist Folders can be used to indicate to Asset where your playlists are stored, sub folders are not scanned, found playlists will be presented under the Playlist entry in the main browse menu.

Exclude Types can be used to inform Asset to not add certain types of audio files (for example your library consists of FLAC lossless files and mp3 files created from the FLAC files, in this instance mp3 should be excluded).

The Artist & Album Handling  has 3 modes (examples using The Beetles): Artist Sort Handling: often artists or composers might include a sort tag, for example Ludwig van Beethoven might have a ComposerSort tag of Beethoven, Ludwig van. This option sets how the sorted values are presented: Combine Duplicate and Similar Artists: imagine you have a large collection, you might find when searching through the list of artists that the same artist name is duplicated because of a umlaut over one of the characters, or a spacing difference, this option corrects these, for example these would appear as one artist:

[track #] - [title] for album tracks: is useful for control points which do not display a track number when showing an album, this option embeds the track number into a title.

[artist] - [title] for Various Artist album tracks: for compilation albums and control points which do not show the individual artists, this option adds the artist name into the title

[title] - [artist] for Title Listing: someone requests the title Breathe, you might find there are 3 Breathes in your collection (David Grey, Kylie, Prodigy), this option for Title browsing only will place the artist after the title.

[album] - [artist] for album listings: for control points which do not display artists when browsing albums this option places the artist onto the album name (only for browsing), useful when looking for The Greatest Hits, as there could be 10 albums.

Multi-Disc Albums show as '[Disc] [Track] [Title]' many albums are released as multi-disc-albums, such as a Greatest Hits collection. Normally one album would be listed 'Greatest Hits' and tracks from disc 1, 2, 3 are all present under the same album (3 track 1's, not good). With this option checked there each album would follow in the correct order in one album folder.

Multi-Disc Album specifies how multi disc albums are displayed, by default Disc 2, etc are combined into the one album.

Size Album Art  allows the maximum art size to be set when browsing though a hand-held controller, the reduced size will give quicker responses.

UpStream Artwork enables artwork from the first discovered track to appear next to an Artist, or Genre

Menu Icons Background Color allows the black background of the main asset icons to be changed, matching your control point background. Colors are entered as #RRGGBB  where RR=red, GG=green and BB=blue, values are in hexadecimal and can be 0-FF (0 to 255), white is #FFFFFF

A to Z Selection Grouping sets how artist and albums are grouped together in the quick A to Z selection which is presented after selecting Artist / Album,

Hide Main View Albums: when browsing by album it might to advantageous to not list CD singles, this option can filter those.

Tunein Username allows favorite radio stations to be added an a user account (free to create) on tunein.com, type the user name into asset to access these favorites.

Library Exclusions enables tracks to be excluded based on ID Tag matches, for exmaple you could exclude all tracks with the genre Christmas, from your main library and include only Christmas genres in a 2nd Christmas instance of Asset. Clicking [Edit] shows details on how to perform this.

User Rename List (Display / Tag mapping) enables the shown tree names to be replaced, or ID tags to be changed (perhaps to blend all  'Pop / Rock' genres to 'Pop). Clicking [Edit] gives details of how to perform the renaming.

Debug Logging Enabled can be used to diagnose problems, it should not be left enabled as the debug logs can grow very large.

Asset is able to decode the audio prior sending to a player, this would be useful if:

Maximum option can be used to allow a player to play higher bit-depth files than it can normally support (by automatically converting 24 bit to a maximum of 16 bit), obviously though not at the higher resolution.

Items shown as +\ are child items of the one above. After the item is added change it's name to the type of item that is browsed by, [A to Z] can be checked for an item allowing selection of A to Z before presenting the full list.

No Track Listing prevents track listings for a given container, an example of this is 'Genre' which has this set, as the track listing is prohibited until Artist then Album are selected.

Restore Default allows the restoration of the Browse Tree to default settings.